Greetings from the representative 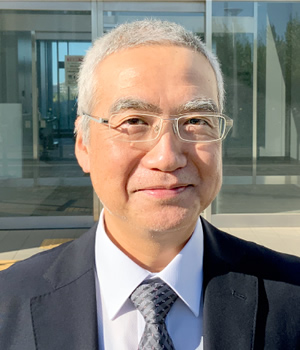 All of us involved in this field are very happy to have been given this precious opportunity to promote this field. At the same time, we take our responsibility very seriously and feel a great sense of urgency.
We have been interested in the movement and behavior of microorganisms, mainly eukaryotic unicellular organisms (protists). Protozoa are evolutionarily the gateway to multicellular organisms such as animals, plants, molds, and mushrooms, and have a wide range of genetic diversity. As a result, they have diverse forms of locomotion and corresponding behavioral patterns. I have been looking at these creatures for a long time and have always wondered what these cells do in the field every day.

When you think about it, even many animals, for example, when they are fertilized (the most important and dramatic event in their life cycle), they become a single cell (sperm) and move in search of an egg. It's as if we are back to being unicellular creatures. On the other hand, there are many protists living in the open air that have not yet been investigated, and they are probably living their own lives in their own way.
It is said that eukaryotic organisms have been around for a billion years or more, and through the long geological history of eukaryotes, their cellular behavioral patterns have been well refined. I believe that they are probably adapting to the rapidly changing outdoor environment in unexpected and skillful ways. First of all, we would like to explore what kind of adaptive capacity they have. For this purpose, we have explicitly set forth a methodology called "Ethological dynamics in diorama environments”.
Now, what is the mechanism of these adaptive behaviors? Cells can actively produce energy for movement based on molecular motions and chemical reactions such as genes and proteins. Research on cellular machinery has been remarkable. Cells are propelled by the nature of their scaffolding, moving and stopping as they bump against intricately shaped obstacles, for example, or in response to chemicals, temperature, or light. The motion of matter coming together is what makes the cell itself move.

If you think about it, you might be tempted to think that the laws of motion of matter can be used to describe the mode of cell motion. This is probably true in principle, but it would be very difficult to write down and calculate from the level of molecular motion. On the other hand, it is also useful to use macroscopic equations of motion, which are a little more phenomenological. We will try to create a mechanical model of cell motility mainly from the latter standpoint, while also paying attention to the former. We would like to make full use of theoretical and computational methods to thoroughly promote this project.

Once I have developed a mechanical model of cellular behavior, I would like to reconsider the mode of movement from a different perspective. In other words, I would like to evaluate it as an algorithm for generating better (e.g., more adaptive as a survival strategy) adaptive behavior under a certain environment. We call them "algorithms of proto-intelligence (heuristics)" because they appear in the behavior of unicellular organisms such as protists.

The key words that characterize this field are complex environment (Diorama environments), cellular behavior, dynamics modeling, and proto-intelligence algorithms. It is difficult for a single person to cover all of these topics, but it is effective to develop active collaborations with related researchers while establishing a foothold in your own area of expertise. In the Planned Research, we are trying to share or support the overall concept, behavioral experiments, measurement techniques, mathematical modeling, computational techniques, etc. within the Research Area. I imagine that the people who are doing research related to this Research Area are scattered in various different fields. We hope that you will take this opportunity to develop your own research and work together toward the establishment of Ethological dynamics in diorama environments.

We would like to ask for the support and cooperation of as many people as possible.